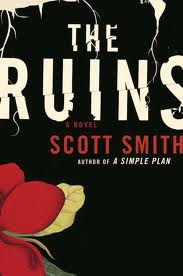 Wow.  I just could not put this down until I found out what happened.  If you read this, make sure you have a free afternoon and a long summer evening because you will be completely swallowed up by this story...
Two American couples, Amy and Jeff, Stacy and Eric, have just graduated from college and go to Mexico for a lazy beach vacation.  They meet and quickly start hanging out with Mathias, a German, and three fun Greek guys who they can barely understand.  One day Mathias tells them how he was actually there with his brother but that they got into an argument and his brother stormed off, headed for an archeological site in the jungle where he was to meet a girl.  Mathias asks the others if they will go with him to find his brother, and so the four Americans and one of the Greeks set out with him for this site, following a crude map pencilled in a note the brother left behind.

When they finally discover the ruins, they find themselves in a disturbing and unfathomable trap, faced with an unlikely predator.  I won't say anymore, not to spoil the ending, but if you're up for a quick, chilling read that you just can't put down, this one will do the trick.

The book was made into a movie in 2008, which is not surprising, since at one point the characters in the book are actually discussing how, when they get out of their predicament, they will sell the film rights, and debating which actors would play them!