Last year my oldest son bought me a lovely Moleskine book journal, where I've been keeping careful track of all the volumes I read.  Unfortunately, that has meant that my book blog has suffered terrible neglect, which is a shame.  Thankfully, my dear friend Joy sent me a copy of the latest novel by her writing teacher, novelist Amy Hassinger, which is a wonderful reason to sit down and write a new post for my blog; not many of the books I add to my journal feel like they merit an entire blog post, but "After the Dam" certainly does.

"After the Dam" follows young mother Rachel as she leaves home in the middle of the night with her baby to drive north to her grandmother's idyllic house on a lake in Wisconsin, in a desperate attempt to regain a feeling of normalcy in her disjointed life.  Unfortunately at the lake house she is confronted not only with unusually heavy rains and threats of the nearby dam flooding, but also with her dying grandmother, and her grandmother's caretaker, Diane, who seems to stand in the way of everything Rachel wants, including perhaps rekindling an old relationship. 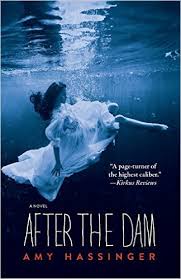 Like a previous novel by Amy Hassinger that I wrote about here, there are myriad themes in this book that mean a lot to me on a personal level.  One of the things that struck me immediately was the very large role that breastfeeding plays in the novel.  In the very first chapter we learn that breastfeeding makes the main character, Rachel, feel "magical, like Wonder Woman".  "She was absurdly proud of this achievement - of feeding her child - prouder than she was of almost any other accomplishment in her life thus far."  Having experienced just this feeling myself, when I read these lines I felt that physical zing of recognition that sometimes occurs when a novel really rings true.  And breastfeeding continues to play a major role in the book.  No matter how much the reader might question Rachel's judgement at certain points in the story and despite her own doubts about whether or not she is a good mother, whether or not she is making the right choices with regards to her baby (sometimes obviously not), breastfeeding is the one unequivocal thing that Rachel gets right all the time, and is rightfully proud of.

Being a mother is another major theme in this novel that hits home for me.  Not only do we have Rachel as a young inexperienced mother, trying to reconcile her desire to fully devote herself to her child and her feeling that she is failing miserably at the societal expectation to combine it with a meaningful career, there is Diane, an older, seasoned mother, whose main focus in life is protecting her grown son, Rachel's ex-boyfriend Joe, from what she sees as their destructive relationship, and doing everything she can to keep Rachel away from Joe.  What I loved about what Hassinger did with Diane is that she did not demonize her.  Diane is diametrically opposed to everything that Rachel is seeking in the novel; it would have been easy to make her a villain.  Instead, Hassinger makes Diane a character of flesh and blood and real feelings, and I found myself sympathizing with her a lot of the time.  Diane, too, is a character who is pulled in different directions.  Loyalty to her employer, Rachel's grandmother Maddy, loyalty to her son, loyalty to her desire to live her own independent live in her own cozy home.  Diane also struggles to fit the puzzle pieces of her life together, as Rachel does, as so many women do.   But Diane's age and experience allow her to see her life from a perspective that Rachel does not yet have:

That was the way of it, she thought.  You spent your youth and most of your adult years climbing that upward rise, feeling the powerful momentum beneath you, carrying you up and up, believing that things will continue in just this way, despite any evidence to the contrary.  And then one day, the momentum changed. You found that you were on the far side of the crest, and you were falling now, falling quickly, and everything you'd learned about how to live, how to be in the world, what to strive for - all of this was changed.  You could feel the undercurrent pulling you downward, gravity asserting itself, claiming you, and you knew, moment to moment, that the rise had crested and you hadn't even known it.  And that now you were headed toward shore, where you would thin into nothing, until all that would be left of you was a sheen of moisture on the face of the lake stones. (p. 240)


And just so you don't get the wrong idea from the above meditation on life and ageing..."After the Dam" is not a woo-woo spiritual book!  It has a strong ecological message and a didactic mission: Hassinger has really done her homework about dams and their environmental impact, and shares this skillfully and organically throughout the book via the lives and careers of the characters.  Finally, the book is also a well plotted thriller; as I got to the end of it I could not put it down for fear of what was going to happen.  In my Moleskine journal I gave this book five stars; I highly recommend it and will be choosing it as the selection for my book club when it's my turn to pick the book again.
Posted by Amy at 3:41 AM 1 comment: