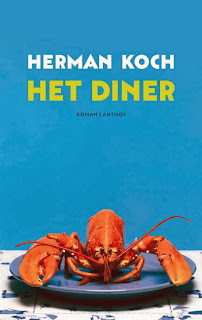 The Dinner (Het Diner) by Herman Koch (2009) is one of the most hyped Dutch novels in recent years.  Not only has it been translated into 33 different languages - more than any other Dutch book ever - it will also end up being made into two major movies.  The first one, a Dutch version directed by Menno Meyjes, just premiered at the Toronto film festival, and the second version, in English, will be Cate Blanchett's directorial debut.
I was planning to read this book in Dutch, but the waiting list at my local library was very long (another attest to the book's popularity) and then my mother sent me a copy of the English translation.  So I ended up reading it in English. (Thanks, Mom!)
Here's a short summary from the website of the Dutch Foundation for Literature:
"Four people. One dinner. An unavoidable decision. The story of a father wanting the best for his child unfolds like a tightly directed family drama with black edges, in which at every turn a little more of the underlying reality is revealed. How far will the father go to protect his son after he finds out what terrible thing the boy has done? Far, is the answer.
In the most congenial of settings, a sumptuous dinner for two brothers and their wives at a fashionable establishment in the capital, knives are sharpened. They are meeting to discuss what to do about their fifteen-year-old sons, partners in crime. During the diner the dissatisfactions and frustrations that have smouldered for years rise to the surface. Paul Lohman, a history teacher who’s taken early retirement, is full of aggression, both towards the restaurant with its pretentious food and service, and towards his brother, Serge Lohman, the popular politician whose ambition is to become prime minister of the Netherlands in the forthcoming elections.
Comforting and loyal as Paul’s wife initially seems, her true role in this horrifying story turns out in the end to be one of treachery. Brother Serge and his wife have a hidden agenda too. After this dinner – you can hear the film music swell – nothing will ever be the same again. Het diner (The Dinner) is a portrayal of modern mores, exploring a contemporary moral dilemma about honesty and dirty tricks. Koch distills this dilemma into the question of how far, as a parent, you open your eyes to the actions of your child and call him to account. The drama cuts close to the bone."
This is one of those books where important elements are slowly and strategically revealed to the reader, and leave you shocked and not sure what to believe at the end.  It was definitely original, it gives you a good feel for modern life in the Netherlands, and it is a quick read.  However, it was difficult to have any empathy for any of the characters, as they all make incredibly poor, selfish, and in some cases, downright evil choices.  It will be interesting to see who Cate Blanchett casts for the roles!
Posted by Amy at 2:28 AM

Thanks, Amy. I've posted this on Book Around the World as a book for The Netherlands.

I read this book and didn't care for it too much. You are right, it is hard to muster any empathy for any of the characters.